If you’re on Facebook, chances are I have invited you to join Simple recipes for complicated times, a group I run. If you’re in the group, skip the next two paragraphs.

It was a sort of reaction to lockdown, a way for people like me, unaccustomed to cooking or managing their kitchens to get some simple recipe ideas, tips on how to work with whatever was available, and so on, from more experienced folks. It took off rather rapidly, thanks to folks like you who saw usefulness in it and invited friends in and helped spread the word. Membership grew rapidly, until we began moderating join requests as a way of cutting clutter. It’s now at around 6,800. (The group even got a bit of kind press coverage, finding mentions in these pieces by Paromitra Vohra, Priya Ramani, Ranjini Rao, and Manjula Padmanabhan.)

On March 19th, we completed a year. As a way or marking the date, (‘celebration’ seems like the wrong word to use for something born of a crisis), I hosted a couple of video chats on the group, which were fun.

Going ahead, I plan to host a fortnightly chat, each time with a different guest (or guests, max three people). It’s called Table Talk and will be live once a fortnight, on Sundays, 9 p.m. IST. I'll also archive these to YouTube or similar for those who couldn’t be there for the live webcast. 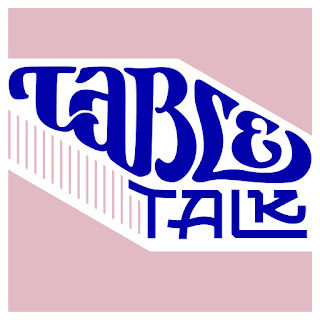 The idea is to have my guests tell stories — which could be in many kinds of media — or do a lecture or a tutorial or a demonstration, or have a debate or chat with two or three people, maybe even things like quizzes. All connected to recipes, cooking and food, of course. This would be for around an hour, maybe more (who am I kidding; definitely more). And then we’d throw it open to the audience to join in, with questions, discussion, debate, because the purpose is to involve the community, for another half-hour or more.

Topics for the first few sessions include: what it takes to actually give up the city and live the farm life, with asides on what kitchen ingredients you may want to carry with you if you’re spending a short stint in another country; summer foods and beverages and also food and literature; tales from one of the group’s most popular story-tellers; what a food reviewer looks for and also why not to be constrained by recipes; writing food for kids, with a reading; a peek into an artist’s travel diaries and a bit about food and art; culinary anthropology and what we know about what ancient Indians ate; creole foods and exploring creole cultures. And more to come.

That lovely logo? Hand-lettered by my talented friend the designer, artist, calligrapher and storyteller Kriti Monga, who was a founding member of the group and frequent contributor.

Gratitude to my friend Shubha Sharma who brainstormed the idea with me and came up with many of the possible subjects we'll be exploring, and Nilanjana S Roy, Manjula Padmanabhan, Rimi N, Venkat Krishnan N, Sameera Khan, Prem Panicker, Kurush F Dalal, Rashmi Dhanwani, Richa Dubey, Anita Vasudeva, Anita Roy, who all took time to critique the idea and offer me their thoughts and suggestions.

If you’d like advance notice of shows, and links to recordings, please subscribe to the Google Group and/or the Telegram Channel. Both are one-way: only admins, i.e., me, can post, so you won’t get any clutter on your inbox. There will be, at most, three messages a week: advance notice of the next live show, and links to recordings of shows just gone by.

Want to be on the show? Get in touch.

p.s. You’ll notice, if you’ve been nice and subscribed to the Google Group and/or the Telegram Channel, that they also reference ‘For Pete's Sake.’ That’s another project I’m developing, about which more soon.

We've all heard that a million monkeys banging on a million typewriters will eventually produce a masterpiece. Now, thanks to the Internet, we know this is not true.
~ Eyler Coates

In three words i can sum up everything I've learned about life.
It goes on.
~ Robert Frost

Ring the bells that still can ring,
Forget your perfect offering,
There is a crack in everything;
That's how the light gets in.
~ Leonard Cohen

May your trails be crooked, winding, lonesome, dangerous, leading to the most amazing view. May your mountains rise into and above the clouds.
~ Edward Abbey, naturalist and author (1927-1989)

I fell in love – that is the only expression I can think of – at once, and am still at the mercy of words, though sometimes now, knowing a little of their behavior very well, I think I can influence them slightly and have even learned to beat them now and then, which they appear to enjoy.
~ Dylan Thomas, Welsh poet, "Poetic Manifesto" in the Texas Quarterly, Winter 1961

A writer is somebody for whom writing is more difficult than it is for other people.
~Thomas Mann, novelist, Nobel laureate (1875-1955)

The world in general doesn't know what to make of originality; it is startled out of its comfortable habits of thought, and its first reaction is one of anger.
~ W. Somerset Maugham, writer (1874-1965)

In times of profound change, the learners inherit the earth, while the learned find themselves beautifully equipped to deal with a world that no longer exists.
~ Al Rogers

Assumptions are the termites of relationships.
~ Henry Winkler, actor (1945- )

Either you think, else others have to think for you and take power from you, pervert and discipline your natural tastes, civilize and sterilize you.
~ F. Scott Fitzgerald

There is no remedy so easy as books, which if they do not give cheerfulness, at least restore quiet to the most troubled mind.
~ Lady Mary Wortley Montagu, author (1689-1762)

Fake it till you make it.
~ (Heard on West Wing)